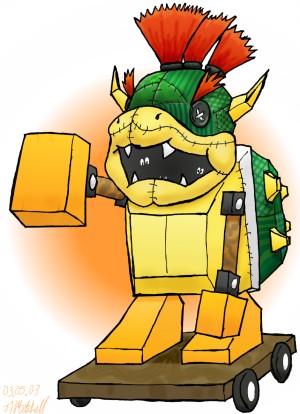 STRENGTHS: The first one was big and the second one was huge.

WEAKNESSES: The original was poorly built.

BACKGROUND: Mecha Bowser (also known as "Bowser???" in Paper Mario) was originally a simple costume designed by the Koopa Bros. to scare Mario. It may have just been a big costume, but it actually impressed Bowser and it was somewhat dangerous in battle. The costume was made out of wood with a patchwork of green and yellow fabric for the skin and broom bristles dyed orange for hair.
Mario destroyed the first Mecha Bowser and beat the Koopa Bros. but Bowser liked it so much he decided to build a second Mecha Bowser. He had the best Koopa engineers working night and day to design a second, improved version which was made entirely out of metal and could breathe fire. This one was given to Bowser Jr. who lost it in a battle against Mario and FLUDD.

EVOLUTION: The first Mecha Bowser was very primitive; it was made out of wood and a patchwork of fabric and it only had a few mechanical parts. It was more or less a costume run by the Koopa Bros.
The second Mecha Bowser is totally mechanized and nearly four stories tall. It is also made entirely out of metal.