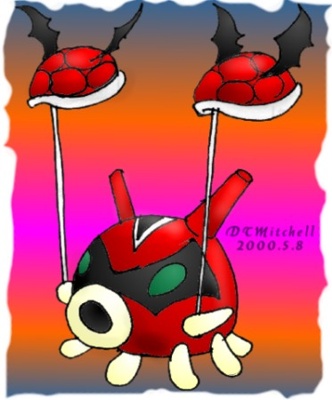 STRENGTHS: They have lots of magical power.

WEAKNESSES: Weak against Fire and Thunder.

BACKGROUND: Octolots are odd looking creatures. They resemble an octopus with a mask and horns, and they carry two poles with what appear to be winged turtle shells on top.
Octolots first appeared in the mushroom world wilderness when Smithy invaded, so seems reasonable to assume that they were introduced by him. They are agressive, and have powerful magical abilities.
Octolots have reasonable intelligence, which is suggested by their magical abilities. They often surround themselves with native wildlife, using them to help attack those who enter their territory. Although most of the Octolot population seemed to be destroyed after Smithy left, there have been reports of Octolot sightings since.