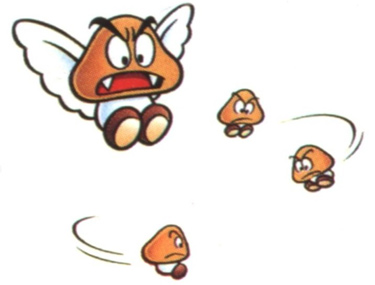 SKILLS AND ATTACKS: Swooping down on unsuspecting victims, spawning Micro-Goombas.

STRENGTHS: They fly...that makes them hard to reach at times.

WEAKNESSES: They are susceptible to virtually any kind of attack you can imagine.

BACKGROUND: Rumour has it that Bowser found Koopa Paratroopas to be so useful to his army that he had his most powerful wizards endow Little Goombas with wings. Thus the Paragoomba was born.
While not as common as regular Goombas, Paragoombas are still fairly numerous in some parts of the Mushroom Kingdom. Unlike their Goomba cousins, relatively few Paragoombas have left the Koopa Troop to lead peaceful lives in the Kingdom. In general, these creatures are not too dangerous, but they can pose a problem to the average traveler if they attack in large numbers.
On a final note of interest, Paragoombas were briefly identified as "Flying Goombas" when a new division of parachuting Goombas was added to the Koopa army and borrowed the title "Paragoomba". You can read more about these "Paragoombas" on the Goomba page.

EVOLUTION: Around the time of Super Mario Bros. 3, an explosion of new monsters occurred in the Mushroom Kingdom. Paragoombas were among those monsters.
In their first appearance, Paragoombas came in two varieties: dark brown ones would hop and use their wings to gain extra height while in the air, while light brown ones were actually able to stay airborne for a short period of time, and often spawned microgoombas.
Paragoombas underwent a radical change in Super Mario World, becoming round and too hard to stomp, much like their Goomba cousins. These Paragoombas only came in the dark brown variety, and could not fly well at all. They were also known as "Flying Goombas" in this game. On an interesting note, these Paragoombas had perhaps the most beautiful wings of the group.
In Super Mario Land 2, Paragoombas returned to their roots. They were once again mushroom-shaped and oh-so-stompable. The design of these Paragoombas was pretty good; the dark picture above doesn't show it very well, but they were actually pretty close to the artwork for the games.
Paragoombas disappeared from the Mushroom World for quite some time, but finally returned in Paper Mario. This latest design is arguably the best; they look almost exactly like one would expect a Paragoomba to look.
Mario Clash saw the most unusual change ever in Paragoomba evolution: they grew two horns from their heads. These Paragoombas also somewhat resemble the rounded ones from Super Mario World.
Paragoombas returned in later Paper Mario games with the same look but more detail.
Paragoombas made an appearance in Super Princess Peach where Angry and Sad variations also joined the ranks. The Super Princess Peach Paragoombas have a much wider wingspan than normal.
New Super Mario Bros. and New Super Mario Bros. Wii featured Paragoombas as well, with a fairly traditional 3D appearance.
Paragoombas returned in Super Mario Galaxy 2 with a very traditional design. These were among the few Paragoombas that could be killed with a single stomp.