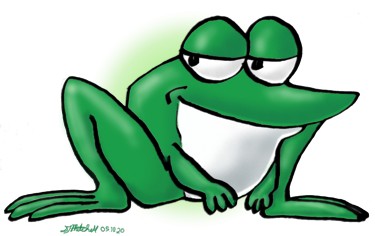 STRENGTHS: Surprisingly nimble, for a frog.

BACKGROUND: The Frog pirates are generally just a bunch of larger-then-life lazy toads (or frogs) that wait for their next meal to come along. Kamek agreed to feeding them (although with what is unknown) as long as they joined him in the "good" fight against Yoshi! Speaking of which, Yoshi and the Frogs share a similar sized tongue, distant relatives perhaps?
Unlike most monsters in the Mushroom Kingdom, the Frog Pirates don't seem to be particularly bothered about fighting, destroying Mario and Yoshi, or much else! They are quite lazy, which is one reason why they leg it as soon as they think their mission is over. Despite their laziness, these freaky amphibians are a decent shot with their tongues, they probably practice in their spare time... on flies...
Prince Froggy rules over the Frog Pirates, and allows them to hang around in his castle. When Kamek and Prince Froggy met Yoshi, Kamek shrunk Yoshi into a bite-size mouthful. Then the frog ate the dino. Yoshi managed to upset the frog's digestion system pretty badly, by using eggs to pelt the dangly bit in the stomach. Whether Prince Froggy survived to rule another day, is unknown, although he has yet to be seen again.