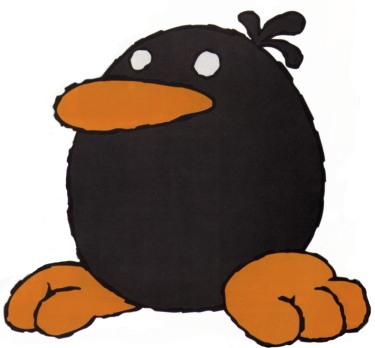 WEAKNESSES: His butt. And eggs do major damage! (Too bad you can't use eggs when battling him!)

BACKGROUND: Raphael was a normal Raven until Kamek made him big, hoping Raphael would defeat Yoshi. But, no! Yoshi kicked his butt, and Raphael got launched into space, somehow creating the Raphael constellation. After floating around in space for a while, gravity pulled him back to earth. He crashed on LavaLava Island. He didn't want to get beaten up again, so he befriended the Yoshis. But it became more than friendship. He became the leader of the island. Now, the Yoshis (and even Mario) come to him in times of need.

EVOLUTION: Raphael looks pretty much the same in both games. He's only bigger in Paper Mario, and a tiny bit more blue, with a yellower beak.
Raphael's big change is socially. Instead of being a Boss for the Koopa Troop, he's now the guardian of the Yoshis and the jungle! Mario couldn't have saved all of the Star Spirits and beaten Bowser without his help.