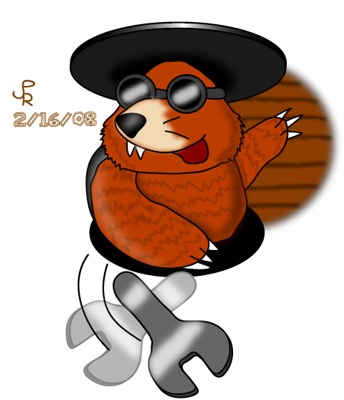 STRENGTHS: It can hide in its hole.

BACKGROUND: Rocky Wrenches use to like to live in airships. They were the operators and worked in little manholes. The problem was that Bowser didn't give them weapons. So when Mario was near them they had to throw tools at him. This caused the Koopa Troop's supply of wrenches to go down. Rocky wrenches got kicked out of Bowser's army for a long time.
Rocky Wrenches later were forgiven when Bowser took over the universe. Since they are, after all, Monty Moles, Bowser used them in more grassland areas. He also gave them wrench-making machines. They also seem to have learned new tactics.

EVOLUTION: In Super Mario Bros. 3, Rocky Wrenches wore sunglasses similar to the traditional Monty Mole and hid in manholes.
In super Mario Galaxy they now wear red bandannas, and their holes have tops that open differently.