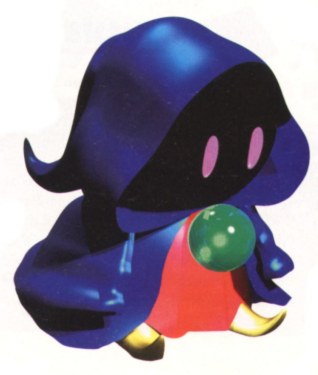 SKILLS AND ATTACKS: A large variety including teleportation, flying and fortune-telling.

STRENGTHS: They are very powerful magicians, and they're powerful against most magic attacks.

WEAKNESSES: They are usually poor fighters, and they're somewhat weak against Geno's attacks.

BACKGROUND: Shamen are the magicians of the Mushroom World and it's neighbouring lands. They can be identified by the dark blue hooded robes they wear. Many Shamen live by a strict code of honour and are usually friendly and trustworthy. Shamen are notorious for their salesmanship and most make a living by casting charm spells, telling futures or running magical games and shows. So while Shamen aren't normally dangerous, naive travelers may lose a lot of gold coins to these shrewd magicians.
Some Shamen are not so honourable, though. Valentina managed to hire a large troop of them for her conquest of Nimbus Land. Rumour also has it that the Magikoopas of the Koopa Troop originally studied under the Shamen and there is a rivalry between the two groups now.