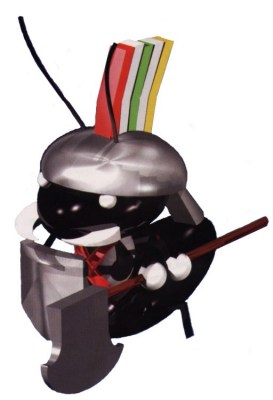 SKILLS AND ATTACKS: Carni-Kiss, Vigor Up.

STRENGTHS: Strong against Fear and Sleep.

BACKGROUND: Shoguns are an ancient race of giant ants living in the Dessert near Land's End. They know many secrets of the desert and use whirling sand pools to transport themselves through its vast plains. While these creatures do not quite have human level intelligence they are still very smart.
The Shoguns agreed to assist Smithy when he invaded the Mushroom World because he offered them advanced weaponry and armour. Shoguns are typically territorial and unwilling to cooperate with outsiders but Shogun legends tell of a long battle for survival with the other creatures of Land's End, especially the Spinthras which are the Shoguns' main predator. With the equipment supplied by Smithy, Shoguns have been able to better defend themselves from these creatures.
As mentioned before, Shoguns are territorial and will fight travelers entering Land's End, although they tend to avoid battle when possible. They are dangerous and only seasoned adventurers should enter Land's End in general. Shoguns can be bargained with but it is hard to gain their trust.