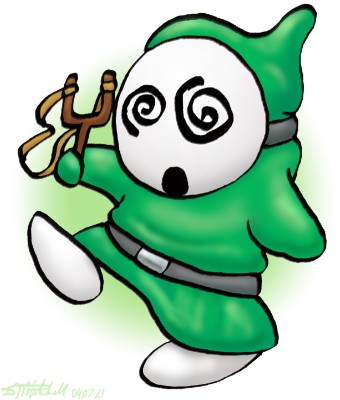 BACKGROUND: Valentina recruited a small army of Shy Guys from the 8 Bits Club and then added them to her army, arming them with Slingshots. They wear green to show they're a part of Valentina's troops and call themselves Sling Shys.
Sling Shys are often confused, apparently they have a bad habit of staring at Valentina's Pinwheel monsters for too long and getting dizzy from it. This makes them a little less dangerous in battle, and they're actually among the weaker troops in her army. A lone Sling Shy wouldn't pose much threat.
Even though they're not too bright, Sling Shys can surprisingly cast a number of transformation spells.