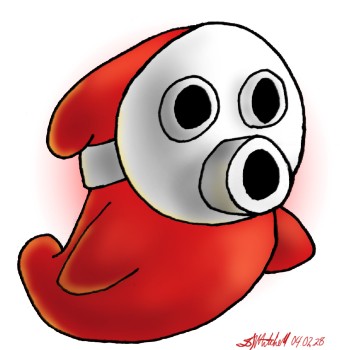 SKILLS AND ATTACKS: Can shoot a volley of bullets.

STRENGTHS: Can hover above the ground, and can shoot bullets. They are also

WEAKNESSES: They have very little life and will be defeated after only one

BACKGROUND: These monsters first appeared in the hazy maze cave when Bowser took over Peach's castle and stole the Stars. They appear to be a long lost relative of the Snifit that lives in deep caves and hadn't been discovered for quite a while. Since that adventure, Mario hasn't been down deep enough to encounter these enemies again.
The Snufit has a white mask with a cannon mounted on it, and it hovers approximately 1.5 metres off the ground waiting for unsuspecting prey. The Snufit is significantly smaller than the Snifit. This enemy appeared in hazy maze cave, and the metal cap Switch cave.