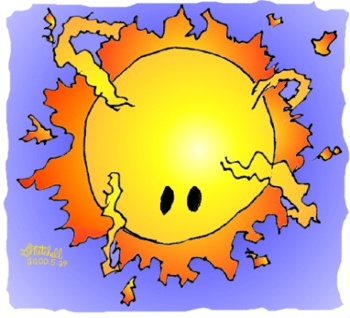 STRENGTHS: Strong against fire attacks in Super Mario RPG, but they're virtually

BACKGROUND: It is unclear whether Sparkies are electrical or fire-type enemies. They exhibit some features of both. Either way they look like...a spark!
In the wild, Sparkies tend to live in firey, volcanic areas, where they are well-adapted to the climate. They can, however, be tamed, and are used as sentries by Bowser. When tamed, Sparkies can easily be trained to defend certain areas, and they are able to "hang on" to walls and ceilings.
These creatures are not usually too dangerous, as long as you stay out of their way.

EVOLUTION: Sparky first appeared in Super Mario Bros. 2 as "Spark" These monsters were quite different from the creatures we see today, which leads to some question over whether or not they are indeed the same species. As you can see, Sparks have dark colouring, and large, white eyes, as opposed to the bright, orange colouring of later creatures. They seem more "electrical" than the later evolutions.
In Super Mario World, L'il Sparky appeared. Despite it's somewhat more "firey" appearance than the older ones, it still looks a bit electrical. It also shares it's name with the original Spark, and behaves similarly as well.
Super Mario RPG introduced "Sparky". It's similar name suggests that it belongs in the group, but it is even more firey than the previous type, and it doesn't behave much like them.
A creature named Spark appeared in Luigi's Mansion; they were red with small spikes and quite explosive. It's uncertain if these are the same as regular sparks or a different species.
Some scientists have suggested that Sparkies are evolving from electrical creatures into firey ones. Another argument is that the creatures tend to display more fire attributes when in the wild. Perhaps future games will clear this up.