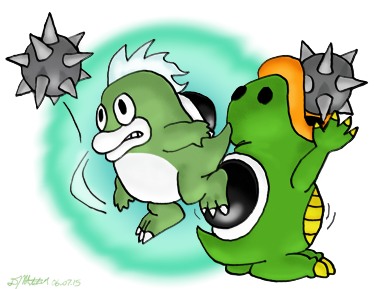 SKILLS AND ATTACKS: Spits up and throws spiked balls.

STRENGTHS: Their balls are dangerous.

WEAKNESSES: Their attacks are fairly predictable and they don't have any defense.

BACKGROUND: Spikes have gone by many different names, but they all have similar features: They're short turtles with a black shell and either a mowhawk or no hair at all. They also have a large mouth and big lips, the better for their unique signature attack: vomiting spiked balls and throwing them!
Spike is one of the rarer Koopa species, only appearing in certain adventures. They can survive in many different climates, but they seem to like extreme temperatures and can most often be found in icy-cold areas, or sometimes in Deserts.
Bowser tends not to use these troops too often because they're uinintelligent and often quite lazy. In spite of this, they can be dangerous in large groups as it is hard to dodge so many spiked balls at once.

EVOLUTION: Spikes first appeared in Super Mario Bros. 3 - they were supposed to have white hair in a similar style to Bowser's but they actually appeared to be bald in the game. They were renamed to Mace Penguins in Yoshi's Island, but this appears to be a mis-naming since the creatures are definitely still Spikes.
In Yoshi's Story Spike was renamed yet again to Gabon. Gabon was bald again and his lips became huge and orange-coloured.
It was a long time until Spike resurfaced twice in two games. In Super Princess Peach they have hair just like the artwork for Super Mario Bros. 3. They also came in an angry, orange-haired variety. In New Super Mario Bros. they're referred to as Snow Spikes and they wear mittens and toques. That's odd considering they previously hung out in icy levels without any protection at all!
Spikes return again in New Super Mario Bros. Wii with a very traditional (albeit 3D) look - their hair is a bit more blue this time.