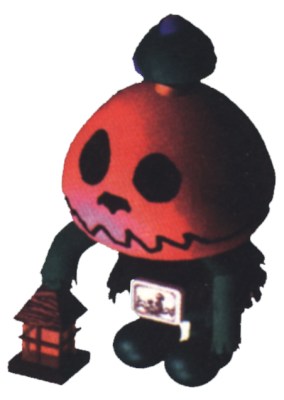 BACKGROUND: These monsters look a lot like their Hobgoblins, with their large pumpkin heads and shabby clothing. Straw Heads are much harder to find than their green counterparts, and it is appears that they may actually be separate species.
Legend has it that Straw Heads are magical soldiers created by a powerful magician who was onboard the ship that sunk into the sea, in an attempt to save himself. They were based on the Hobgoblins the magician had run into on his travels, but they are filled with straw, like a scarecrow, and have no heart or brain.
In the end, Mushroom Kingdom experts have decided that these are at least a distant relative of Hobgoblins. Straw Heads are very rare, there are a few inhabiting the sunken ship that Jonathan Jones now rules and reports suggest that some may have left the ship and started traveling around nearby lands. Little is known about how dangerous or aggressive these creatures are, but Mario and Princess Peach claim that they were fairly easy to beat in battle when they visited the sunken ship.