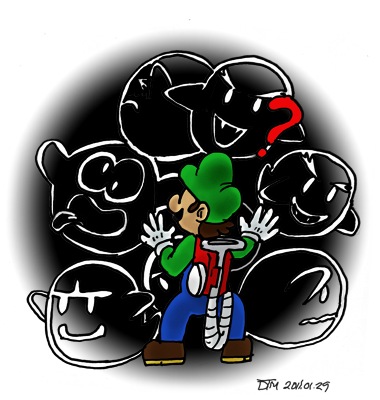 SKILLS AND ATTACKS: Blowing you back to the beginning of the mansion

STRENGTHS: he is strong when there are enough Boos in the area

WEAKNESSES: He weakens as each Boo in the area is caught

BACKGROUND: The Mysterious Power of the Boos (or so he is called) is the power of the Boos that was created by the Boos desire to turn intruders into a painting. He is strong when there are several Boos in the area he is in, but he weakens with each Boo caught. Because the Boos power is weakened with each one of them caught, it causes him to not be able to think fully of what he is supposed to say when all the boos aren't together. When Luigi was searching for Mario, brfore entering the Balcony without 20 Boos, his Gameboy Horror started rapidly flashing red. Then the Mysterious Power of the Boos appeared before him. The ghostly power taunted him, saying that he could vacuum him up because he is a mysterious power. He then asked why Luigi didn't just give up and told him about why he wishes for such to happen to Luigi and how he was created. he then blew Luigi back to the Foyer. However, after catching 20 Boos, the Boo Power could no longer block Luigi and didn't have the strength to blow him back. So he just gave up and Luigi continued his search.