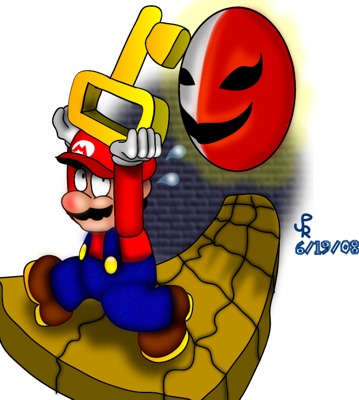 SKILLS AND ATTACKS: It can fly pretty much anywhere it wants, teleportation.

STRENGTHS: Strong against any attack.

BACKGROUND: Supposedly, these Masks were created by Wart to protect the Fortress keys. The substance he used was so strong, that the mask is pretty much invincible against any attack.
Whenever an intruder comes by to pick up the heavy key, Phanto wakes up from its sleep to chase and hunt down whoever is trying to steal the key. Although, strangely, the Mask was not given much intelligence, as once the intruder drops the key, Phanto just stops and returns to sleeping until the key is picked up again. Other then that, not much is known about the Mask's history.

EVOLUTION: Originaly, Phantos were a half red and half white color. In the later versions of Super Mario Bros. 2 though, they're shown as being brown.