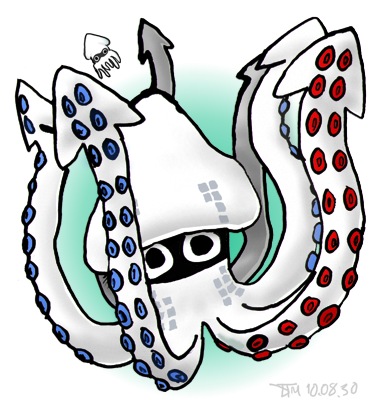 SKILLS AND ATTACKS: Attack with its tentacles.

STRENGTHS: The big size gives it a huge advantage.

BACKGROUND: Bloopers have appeared in many big forms, but this is probably the biggest Blooper of them all. Big Blooper lives in the Tile Pool and it blocks enemies from moving on to Fort Francis. Nobody knows how the Big Blooper got so big and what it does in the Tile Pool. Some believe that it was created, but some say that it's an ordinary Blooper that have grown bigger than normal. The Big Blooper has ten tentacles, but one of them got badly injured and that tentacle is the Big Blooper's weak spot. The injured tentacle is red compared to the other tentacles that are blue, which makes it easy to recognize in battles. Mario and his team defeated the Big Blooper, but it still survived the battle and it still guards the Tile Pool.