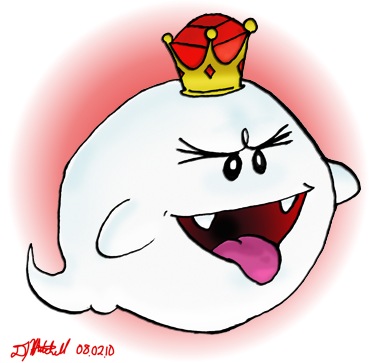 BACKGROUND: If you thought Big Boo a.k.a. Bigger Boo was the leader of the Boo Clan, think again. It's supreme ruler King Boo, Bowser Bot and all, here to do whatever he feels like. It's not his faul he's evil. He's just trying to have some fun. But those pesky Mario Brothers always get in the way! So he tries to kill them. Okay, it's a little extreme, but you get a little cranky after spending enough time in Limbo to become the king. So leave the poor guy alone, will ya? Sheesh, first Booster and now this... (grumble grumble)

EVOLUTION: His royal highness really let himself go on Isle Delphino. He's ten times bigger, not to mention he has an abnormallly large tongue now.